CBT For Psychosis: Approaches Families Can Use 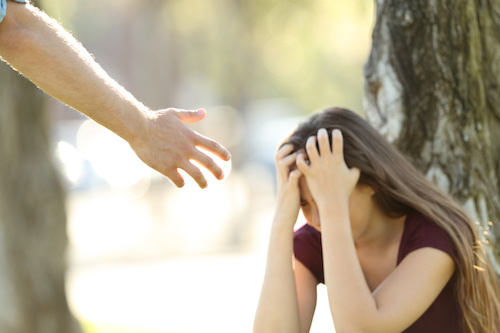 Cognitive Behavioral Therapy (CBT) is gradually becoming recognized and available as a psychological approach to mental health problems. But what exactly is it? Well, CBT works with thoughts (cognitions) and behaviors to help with mental health problems. It’s becoming increasingly famous, particularly for teaching people what they can do to improve depression and anxiety. But it’s also being used to help with symptoms of psychosis, such as hearing voices and paranoia.

Schizophrenia occurs in about 1% of the population, but psychosis is a bit more common. In the U.S., as many as 3 in 100 people will have an episode at some point in their lives; of that number, approximately 100,000 young people experience psychosis each
year.

Psychosis has many causes. In any person with the symptoms of hearing voices or paranoia, you will find a number of different things coming together to cause and maintain the symptoms. Every individual is different, but here are a few common contributors:

• Bereavement is an important factor for some. If you lose a loved one, you may feel the presence of that person. You may see or hear them talking, smell a perfume or an aftershave, or you might feel a touch. These experiences are “hallucinations,” but they tend to only occur briefly and gradually become less common. They can be both comforting and confusing.

• Sometimes at the time of birth, due to a prolonged labor or forceps delivery, a baby can experience a lack of oxygen. This can make psychosis more likely to occur in adult life.

• Migration can be an important factor. For example, coming to the U.S. from a war zone like Syria can trigger psychosis. This is possibly because you feel as if your roots have been lost and because of the stresses that occurred before you left, in addition to the new stress you experience when you arrive in your new home.

• Lack of sleep is very powerful in driving psychosis. In studies where people were kept awake for prolonged periods, most started to hear voices and/or see things that were not there. Finally getting sleep led to recovery.

• Trauma can also be a cause of psychosis. Sadly, abuse in childhood, bullying and domestic violence can lead some to become and remain fearful and paranoid. These experiences are strongly associated with hallucinations related to the traumatic experience.

• Then there are illegal drugs. There are some very powerful drugs available—and cannabis has become
much more toxic in recent times. Similarly, cocaine and amphetamines can bring on psychotic episodes.

One or more of these issues can affect many people with serious mental illness. As psychiatrists and CBT therapists, we need to work out what they need in treatment. Does the person need work on bereavement? Do they need help to sleep better? Have they suffered a trauma that they haven’t been able to talk about? Are drugs a problem? It will usually be some combination of factors.

If you know somebody experiencing psychosis, think about what might have caused it. Once you know that, you might be able to help by listening and trying to understand—and by using some “CBT techniques” to help.

Help Them Feel Heard And Supported

We have found that simply being friendly to someone experiencing psychosis seems to have a positive effect—even when symptoms have been present for years. Listen to their concerns, however strange they may seem, and say something like:

“Okay, we are in this difficult situation now, but there was a time before this started when I remember you were feeling much happier and doing okay at school and work. Let’s remember the successes you have had. Let see how we can work out a way to get back on track again.”

That seems to be important to increase confidence and self-esteem. CBT is an approach that works toward jointly agreed upon goals. You decide the goal with your loved one; it won’t work if they don’t agree. You could try, “We will work on getting out for a walk today” or, if that’s too much, “Why not come in and watch TV with us for an hour or two?”

Help Them Learn Their Triggers

CBT approaches are used to try to understand and explain what triggers psychosis and what keeps it going—so ask questions. A person might say, “The Mafia is watching my house all day long through cameras.” Follow that up with reasonable questions like, “Can you see the cameras?” “Why do you think it is the Mafia doing this?” “Could something else be going on?”

If these discussions cause more distress, especially if they are leading to confrontation, it is certainly better to stop and talk about something else. There’s also a limit to how much talking helps, especially if it’s going around in circles, so you can always agree to disagree. But it’s never a good idea to agree with or completely dismiss delusional beliefs. If the person says the Mafia is watching the house, it doesn’t help to say, “That’s simply not true.” The approach is to listen, understand why they believe what they do and prompt with questions. The delusion might change, and more often, the conversation will simply improve the person’s mood and behavior because they’ll feel listened to, even if it’s clear you’re not convinced about their beliefs.

Help Them Understand That Their Delusions Aren’t Reality

We might also try to investigate their beliefs to see if we can find reasons for their paranoia. This may seem like reinforcing them, but it also allows the person to explain and then test out their own delusions. In CBT, there’s always some kind of homework, some simple task that you agree to work on for the next week. For psychosis, this might include keeping a diary of what’s happening outside the home and what the explanations might be. The aim is never to convince the person they’ve got it wrong, but to understand and think of other possible explanations or to simply reduce the distress and interference in their life caused by their beliefs.

CBT can also be useful for auditory hallucinations, like hearing voices. If they seem to be hearing something when nobody is speaking, ask, “Could you tell me more about what you’re hearing? Is it one voice, or is it several voices? Do you know who they are? What are they saying to you? Can you share that with me?” Being curious about their psychosis is good because when you have psychosis, you very often feel quite cut off from other people. We want to help a person feel less distressed and
isolated. There are lots of good coping strategiesavailable, but often people who hear voices use unhealthy coping strategies, like alcohol or illicit drugs.

It’s also important to score the severity of a symptom (e.g., on a 1-10 scale) with your loved one, as well as an “improvement score” after an achievement of a goal—for example, to see if the CBT technique is working. CBT techniques for psychosis go at a slow-but-steady pace because they’re a gentle approach to psychosis. But it’s crucial to also have access to expert help. With help from professionals and loved ones, some people get better quickly after their first episode, while some people get better later. This is the good news. People might feel depressed and defeated, stigmatized and hopeless, but recovery is
possible.

Learn more about the symptoms, causes and treatment of psychosis by visiting nami.org/psychosis.

Note: This was originally published in the Winter 2018 issue of the Advocate.